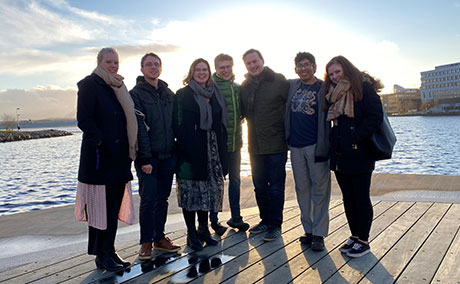 What is the JSU-NAC Spring forum?

What did we talk about?

One of the main questions was Integrated student democracy – Why do we succeed to reach out and integrate certain groups, while we fail with others? Where we discussed different integrations problems. Both we here at JSU and Malmö had some problems integrating Swedish students into certain more international situations. The problem was mainly with students whom hadn’t been integrated into the international situations early on in their time on campus. It seemed like nervousness over switching languages was a typical problem. It helps to have one primary language everyone can understand, and JSU’s English first approach seems to be a good way of integrating all students into one student-life.

We also discussed The Swedish National Union of Students (SFS) related questions such as housing and the propositions from the SFS Board. THS (The Royal School of Technology’s Student Union) has gone out and advertised the need for a new political program for student-housing from SFS. There is a problem of more and more expensive student apartments being built because of the lack of student housing. The current political program does not consider differences in city size. This is a problem since bigger cities like Jönköping, Gothenburg and Stockholm are have a very different housing problem then a city like Östersund or Kristianstad.

During day two we also discussed the possibility of political collaborations with Malmö Student Union. We’ve had a long tradition of working together on different political projects. We both are two student unions with a lot of international students and are also both previous members of the E4 Student Party. We talked about the need for better information about student politics in English, since there is plenty of problems that mainly effect international students, but they are currently not very well represented in SFS.